I have always wondered how one would sweep a lady off her feet who isn’t dazzled by lunch or dinner at a fancy restaurant or a mouthwatering slice of pizza from Café Reze on Buganda Road. Well, somehow, Ashraf Ashaba, a journalist managed to do it when he swept magistrate Happy Kyomuhangi off her. The two have since become one after successfully tying the knot on 29th December 2018.

Examining Ashraf’s recounts, this is as close as a case of love at first sight comes although Happy wasn’t in the know that a reporter in her courtroom was admiring more than just the way “she cross-examined litigants”.

“I had gone to cover a story at the magistrate’s court of Bududa District where she was a magistrate. While in the courtroom I admired her as she cross-examined litigants. I later got her phone contact from a friend in the security circles,” Ashraf noted as quoted by mywedding.co.ug

“I got to know Ashraf when he invited me for an interview about the Uganda Judicial Officers Association (UJOA) elections because I was contesting as secretary for the treasury of the association,” Happy recounted in her revelations to mywedding. 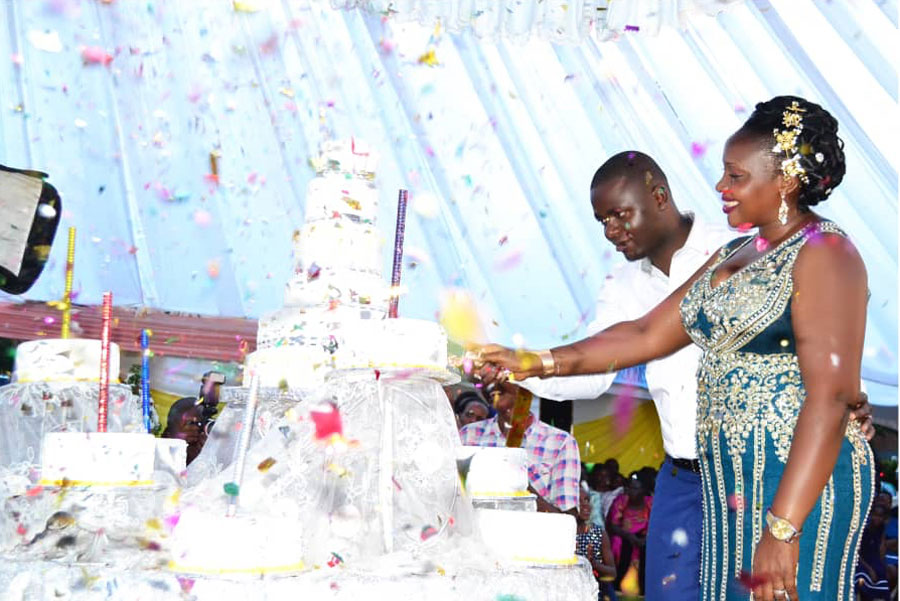 An interview with the magistrate at Mt Elgon Hotel in Mbale only intensified his admiration for judicial officer who spoke with “a soft and sweet voice”. The two eventually became friends and ran into each other “several times at Islamic University in Uganda (IUIU)” where Happy worked as a part-time lecturer of Law before one thing led to another. Ashraf worked there too.

“One evening I called her for a coffee date at Mbale Resort Hotel but she declined, saying she was busy. I persisted and she later accepted. So while at the hotel I knelt and proposed to her with a ring and a flower. Because she loves flowers I nicknamed her Flower,” he explained.

“After several coffee dates he always sang for me love songs, told me nice love stories for a long period and that is how I fell for him. He became more attractive, caring and loving,” the bride narrated.

After casually visiting each other’s parents, the couple set dates for their functions and in August 2018, the two traditionally got hitched in Katabi, Entebbe at a wonderful introduction ceremony before their civil wedding in December.

Ashraf and Happy kicked off their happily-ever-after with a honeymoon to Queen Elizabeth National Park and later went to Zanzibar Serena Hotel.

Although they admit to receiving contributions from friends and family, the couple say that they largely used their savings and Ashraf advises couples that intend to make things official not to “depend on other people for funds. Fund at least 90 per cent of the wedding.”