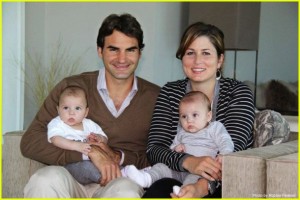 The Swiss tennis legend, the sport’s all-time record-holder in Grand Slam singles titles, welcomed a pair of boys to join identical twin sisters Myla Rose and Charlene Riva whom they received in July 2009.

Roger met Mirka a former tennis pro in 2000 while both were competing in the Summer Olympics in Sydney, they tied the knot on April 11, 2009.

“Mirka and I are so incredibly happy to share that Leo and Lenny were born this evening! #TwinsAgain #Miracle,” Federer tweeted to his fans on Tuesday.

The athlete, 32, signalled the imminent arrival when he announced that he was withdrawing from this week’s Madrid Open in Spain.

“I’ve decided to withdraw from Madrid to be with my wife Mirka during these next few exciting weeks for our family,” read a message he posted on Facebook.

Former tennis ace Boris Becker was among the first to congratulate the family. He tweeted: “Congrats to Mirka and @rogerfederer on the new addition to the #family ! #Leo and #Lenny will partner perfectly their older sisters in mixed.”